If you’re familiar with the old German word of Schadenfreude, it’s what we’re experiencing today reading this news. For years now we’ve been coaching our clients to not write fake reviews as it’s bound to lead to trouble. We’ll here’s trouble for some of our SEO colleagues and their clients… 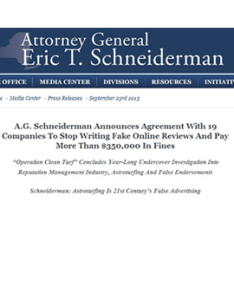 The full list of 19 companies is available in the attorney general’s announcement. It includes a mix of SEO/marketing firms and small businesses. A handful of companies agreed to pay fines that range from $2,500 to almost $100,000, while all 19 agreed to put an end to the writing and soliciting of fake reviews.

NY Attorney General Eric Schneiderman had this to say about today’s announcement:

This investigation into large-scale, intentional deceit across the Internet tells us that we should approach online reviews with caution. And companies that continue to engage in these practices should take note: “Astroturfing” is the 21st century’s version of false advertising, and prosecutors have many tools at their disposal to put an end to it.